Many of the magazines and commercials that are available for viewing today look extremely unrealistic. In fact, they are unrealistic and impossible to achieve due to the use of Photoshop. Photoshop is used to make women appear thinner, wrinkle-free, pore-free, lighter-skinned, and like the “ideal” women, when in reality, that “ideal” is not possible. Before and after images of women that have been photoshopped clearly show how many alterations have been made, and how unrealistic the photos actually are.  According to the American Medical Association (AMA), “’such alterations can contribute to unrealistic expectations of appropriate body image,” so the AMA is taking a stand. They adopted a policy that encourages ad agencies to develop guidelines for ads so the use of Photoshop is decreased. Barbara McAneny, an AMA board member, states, “‘We must stop exposing impressionable children and teenagers to advertisements portraying models with body types only attainable with the help of photo editing software.’” The AMA believes that banning or decreasing the use of Photoshop in advertisements will help women develop a better body image.

The AMA is not the only group that believes Photoshop needs to be limited or banned in order to help women improve their body images. Scientists from Dartmouth developed a mathematical measure of photo retouching so that consumers will know how much a photo has been altered. If consumers know that an image has been altered, they will know that the woman portrayed in the picture is not realistic, so they will not try to compare themselves and feel bad about themselves. In addition, the scientists believe that the scale will act as an incentive to "reduce retouching," so less alterations will be made to photos.

In addition, in 2011, a bill was proposed that would regulate the digital retouching of models in advertisements and magazines, as well as require commercials and magazines to have disclaimers if they have models that have been significantly airbrushed or Photoshopped. Then, in 2014, two congresswomen proposed the ﻿Truth In Advertising Act of 2014﻿, which would restrict the media’s use of Photoshop. Representative Ileana Ros-Lehtinen, co-sponsor of the bill, believes that “’the link between false ads and eating disorders becomes increasingly clear every day,’” and that “’ We need to instead empower young men and women to have realistic expectations of their bodies.’”  If people have realistic expectations of their bodies, then they will have an improved body image. Many believe that one way to change their expectations of their bodies is to restrict the use of Photoshop. 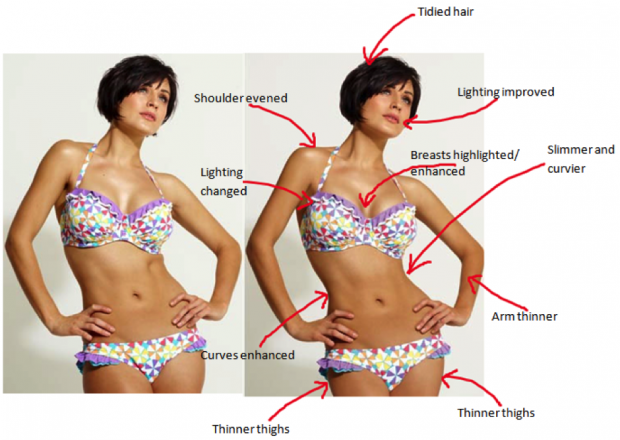